In the past two years, media arts funding agencies have introduced several measures to compensate for the lack of female directors You can see this by consulting the following statistics. Indeed, parity has already borne fruit!

In March 2016, NFB Commissioner Claude Joli-Coeur started the ball rolling by establishing a parity objective for women directors (increased number of projects and budget allocation). It was relatively simple to attain parity at the French Program's Documentary Studio, since the number of female documentary filmmakers approached 50% in the years Monique Simard was at the helm. But it will probably take longer for the Interactive Studio, where there are few women directors. The NFB also recently announced a parity objective for female artisans and technicians working on in-house productions. This will be a fascinating adventure to follow!

Nearly a year later, Telefilm Canada's Director General Carolle Brabant also announced a parity objective for female directors, writers and producers. The results are extremely encouraging. Parity was easily attained in the programs for emerging filmmakers and in documentary, and has proven very helpful for the small budget feature program. But parity struggles to make gains in the big-budget and International coproduction sectors. Here's hoping the momentum continues through 2020!

Johanne Larue, SODEC's Director-General of Cinema and Television Production, also introduced incentive measures. To begin with, rules governing project admissibility were considerably relaxed, which is encouraging for both men and women. Next, a new rule was established. Producers requesting funding for a second project in the same fiscal year must now ensure it is written or directed by a woman. This measure is controversial among RÉ membership, since it splits the benefits between writers and directors. Nonetheless, one can feel the wind changing, and an increasing number of female-directed projects, particularly in the documentary sector, were funded in the latest rounds of selection.

Will the media arts sector and funding institutions sustain these measures over the long term? Only time will tell. All of us at Réalisatrices Équitables ardently hope so. This is our most fervent desire. 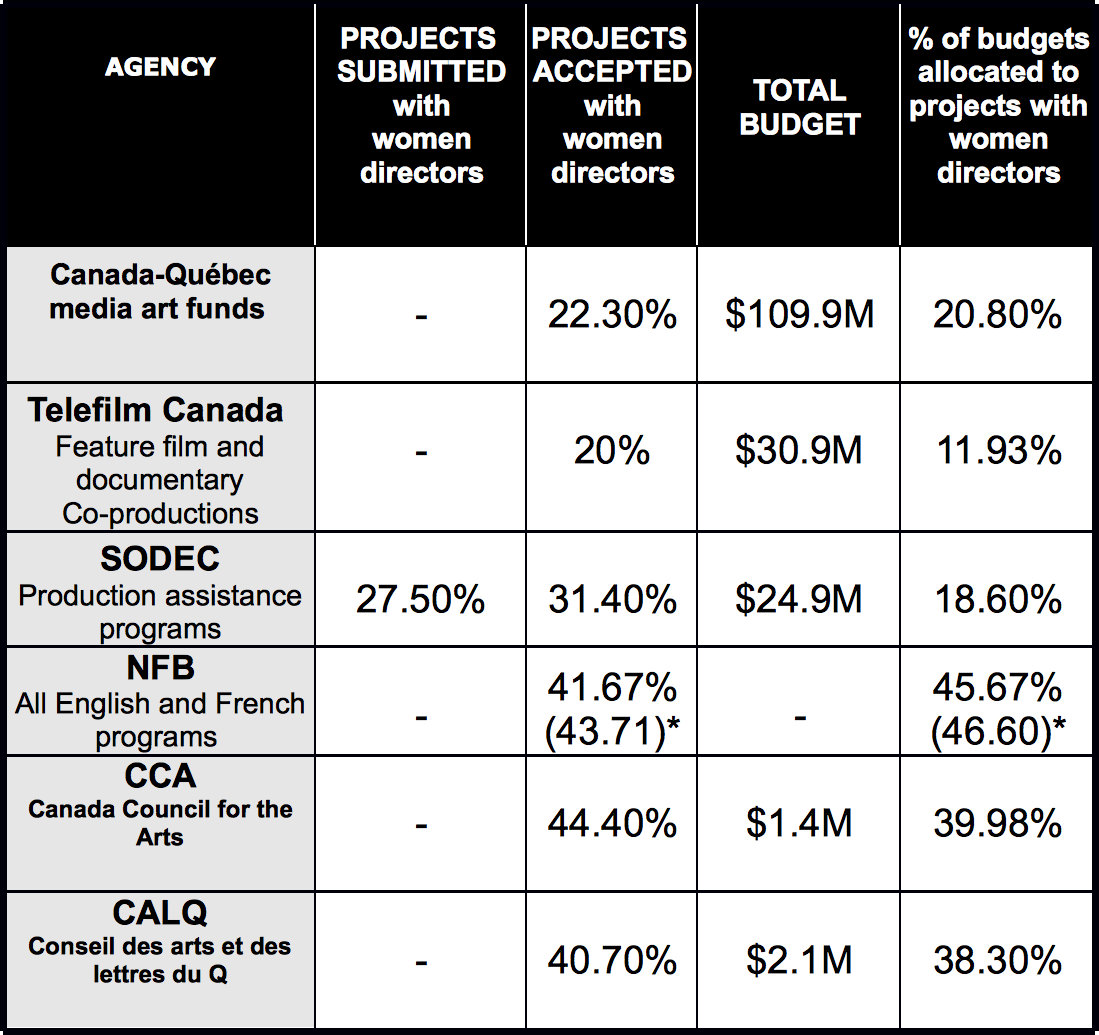 *Mixed projects and budget allocations were divided equally between men and women. 5% of projects were not attributed to either gender. The percentage in brackets is the proportion that does not include non-attributed projects. 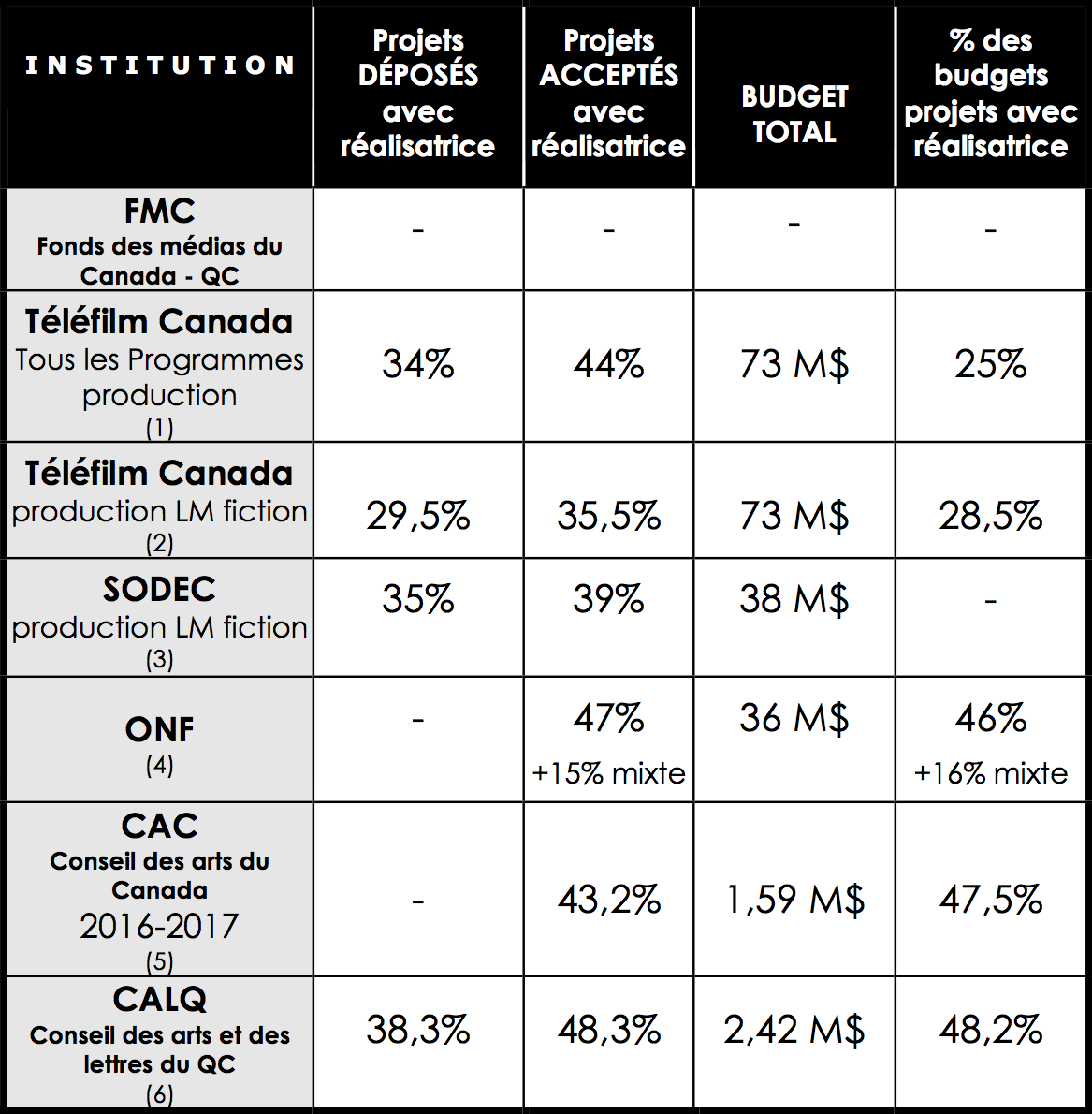 We observe an increase in the number of projects with women directors submitted to SODEC by producers. This is probably also the case at Telefilm. Funding agencies (and Réalisatrices Équitables!) seem close to attaining the goal of encouraging producers to be more proactive in producing women's projects.

Even without perfectly comparable data, we observe significant improvement at Telefilm and SODEC since they introduced parity incentive measures. We observe that the number of projects accepted and budgets allocated to women directors has doubled. Note that Telefilm is aiming for parity in 2020. We hope this momentum continues until that time.

We observe a similar percentage of women directing films at the NFB. However, when mixed projects are included in the data, women surpass the 50% benchmark. Note that between 43 and 60% of women study documentary (film and television) in film schools. The NFB's data is beginning to mirror the demand by women to practice this profession.

We also observe that although no corrective measures have been taken to increase the presence of women on arts councils, along with the NFB, they lead the way in terms of parity measures.
As was the case in the past, when filmmakers are allowed to submit their own projects for funding without intermediaries such as producers, distributors, and broadcasters, the number of funded projects approaches parity.